Quito: the start to an Ecuadorean adventure Situated in an Andean valley some 9,350 feet above sea level, at the foot of the Pichincha volcano, Quito is the primary departure point for Ecuador’s main tourist destinations. Due to its strategic location and well-developed tourism and business infrastructure, the Ecuadoran capital is an ideal place both to start a vacation and to hold national and international conventions and other events.

Quito offers superb connectivity thanks to its advantageous geography, and multiple U.S.-based air carriers offer daily flights to Quito from major North American hubs. There are daily flights from both the East and West Coasts of the U.S, and the city is a short 4- to 6-hour flight from cities like Atlanta, Fort Lauderdale, Miami and Houston.

Quito is, in fact, two cities in one — the old city, where architecture remains unchanged since the end of the Spanish colonial period, and the new city, where you’ll find no trace of that past but, instead, modern office buildings, bustling crowds of businesspeople and other modern hallmarks that place today’s Ecuador and its capital city firmly in the 21st century.

Quito boasts a long history dating back to pre-Columbian period, when local lands were inhabited by members of the indigenous Quitu nation. The city itself was founded on Dec. 6, 1534, by settlers from Spain. Historical Quito was the first world capital to be declared a Cultural Patrimony of Humanity by UNESCO in 1978, and the city was named Cultural Capital of the Americas in 2011. 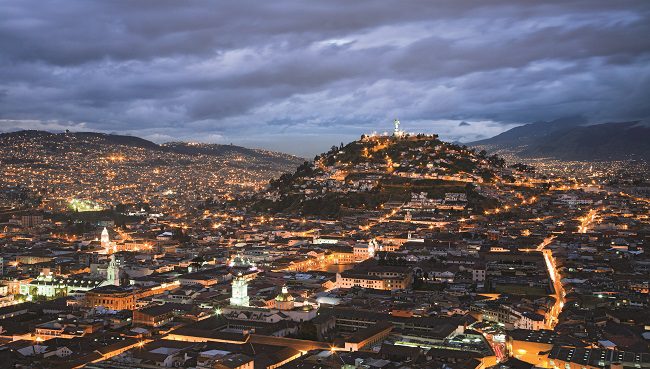 For dazzling views of the city and its surroundings, tourists board Quito’s cable car, TelefériQo, which climbs some 13,300 feet. The 10-minute ride departs from the base of the Rucu Pichincha near the city center, where there is an amusement park, shops, restaurants, and art and culture centers. At the end of the line at the Cruz Loma lookout, a series of paths and overlooks impress visitors with a spectacular bird’s-eye view of surrounding valleys and snow-capped peaks stretching far to the east.

Another must for anyone visiting Quito is the Middle of the World. Lying just 20 minutes outside the capital, this tourist complex was constructed to mark the Equator’s path across the country named for it.

Also in Quito visitors will find Rumicucho, a complex near San Antonio de Pichincha that contains ruins of pre-Inca origin, and the Pululahua Geobotanical Reserve, a unique volcano with a fertile crater cultivated by people who actually live in it. It’s one of only two inhabited volcanic craters worldwide.

Farther afield, Pichincha Province holds even more treasures, including the Cayambe-Coca Ecological Reserve. The protected area covers an area greater than 988,000 acres and crosses the provinces of Pichincha, Imbabura and Sucumbíos. Its main attraction is the snowcapped peak of Cayambe, towering 18,995 feet above sea level and attracting mountaineering buffs from all over the globe.

The hot springs of Papallacta, which lie at the park’s entrance just two hours from Quito, are another very popular destination. Located about two hours northwest of Quito, Mindo-Nambillo Forest Reserve is the country’s most important nature reserve for bird watching.

Quito is also a place for internationally celebrated cuisine and offers unforgettable experiences, with a variety of accommodation options, from top hotel brands for business travelers to exclusive boutique hotels, to please everyone.

Visitors will find the “Capital of the Center of the World” both historical and modern, packed with cultural and natural wonders and leaving no doubt that their travel story should begin in Quito — the Gateway to Ecuador’s Galapagos, Amazon, Cuenca and Guayaquil among other destinations.